The Russian interagency delegation paid a humanitarian visit to Syria

The Russian interagency delegation paid a humanitarian visit to Syria at the end of November.

Retreats to several regions of the Republic of Syria took place, and joint work at a meeting of the interagency coordination headquarters of the two countries to assist Syrian citizens in returning to their home was carried out.

The parties also discussed the establishment of parity terms regarding customs duties and other fees for goods of the Russian Federation similar to those that apply to Syrian products supplied to the territory of Russia.

“The key goal of the trip was the humanitarian action “With Love from Russia”. Humanitarian aid was previously collected from different regions of Russia – these are essential goods and school supplies for children. Sevastopol sent more than 40 tons of humanitarian aid to the population of Syria including the products of the Akvamarin Fish Canning Plant and Yuzhnyi Bereg bottled drinking water. Delivery was carried out by Sokol, a transport company, and Crimea-Oil Trade House”, Mariya Litovko said.

During the meetings in Syria, such issues, as popularizing the Russian language and culture abroad and mutual cultural exchange, were also discussed, in particular, the arrangement of the Cross Days of the Syrian Arab Republic in Sevastopol in 2022 and similar events in the SAR on an annual basis.

Sevastopol State University opened a representative office in the province of Tartus, which will allow accepting foreign students and entering new sites for archaeological research. There was also a joint idea to open a maritime course of study in Syria to prepare future specialists for work in the port of Tartus.

The Russian delegation from Sevastopol included the Deputy Governor, Mariya Litovko; the Director of the Department of Economic Development, Denis Profatilov; the Rector of SevSU, Vladimir Nechayev, and representatives of SevSU. 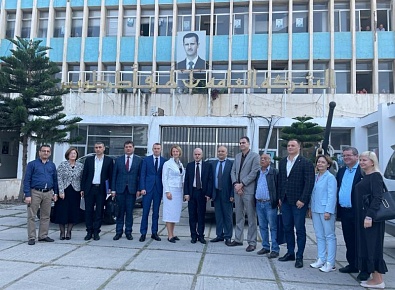